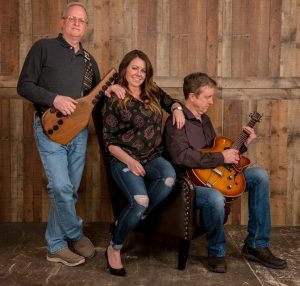 SHOW TIMES ARE AT 1PM AND 4PM SUNDAY, APRIL 26TH

5 Man Trio has been playing since 2002. Former members of the band Mother Funk, Scott and Rich have been playing music together since 1992.

Having just 3 members, the band has an amazingly full sound.

Brittany joined the band in 2013.Brittany adds a nice texture to the songs and provides strong lead vocals.

Scott fills in a lot of musical material with his guitar and effects.

Rich holds down the rhythm section with his Drumitar and Bass Pedals.

Brittany covers popular songs amazingly well using her own style. She is mother of two and is the daughter of Rich.

Early on, Scott played the drums in several bands.  In his later years, he decided to  learn the guitar.  And learn he did.  Scott has a wide interest in many musical styles.   His guitar playing emulates those styles incredibly well,  which allows 5 Man Trio to cover many different  songs.   “Is there anything he can’t play?”.

Musical interests are with piano, keyboards and drums. After seeing Bela Fleck and the Flecktones in concert, he was inspired to build a “Drumitar”.

The Drumitar allows Rich to play drums with his hands and bass pedals with his feet.